News: Zoom in on the Midlands next generation of talent | ISG

Zoom in on the Midlands next generation of talent

Women in Property Midlands, UK has announced its Student Award winners 2021, with ISG continuing to sponsor this important event in the industry calendar. 06 July 2021 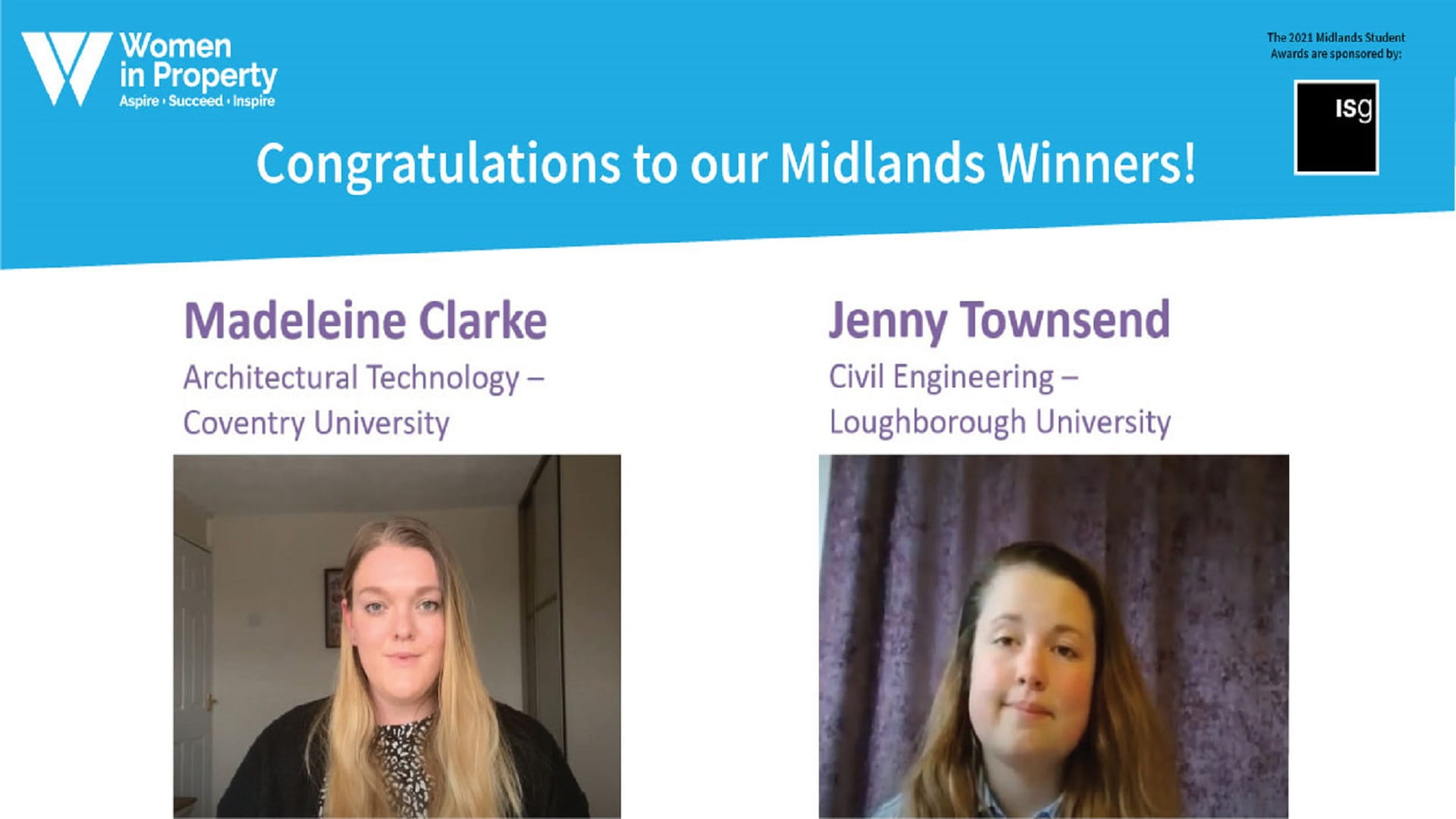 Women in Property Midlands, UK has announced its Student Award winners 2021, with ISG continuing to sponsor this important event in the industry calendar. The awards celebrate the talent, skill and ambition of the Midlands’ female property and construction student undergraduates.

Families, friends and professionals from the built environment industry all celebrated the achievements of the 18 regional student finalists, at an event held on Zoom for a second year. Two winners from across the Midlands region will go through to the UK national final in September.

“We were thrilled to come together to congratulate all our contenders and to meet them all on Zoom. In the absence of a physical event, we asked each of them to submit a short showcase video of themselves, which we showed at the event and which is available on YouTube, for prospective employers to see.” said Sophie Smith, Midlands branch Chair and Land Manager for Spitfire Homes.

This year, two (virtual) judging panels were convened, one for the East and the other for the West Midlands, with one winner announced from each region, Madeleine Clarke, studying BSc Architectural Technology at Coventry University and Jenny Townsend, studying Civil Engineering at Loughborough University.

In addition, the judges took the unusual step of awarding three students with Highly Commended.

The National Awards programme, which ISG sponsors for the Midlands, was established to seek out the top built environment students each year and raise awareness to the many amazing and diverse career opportunities offered across this industry. Each 2nd year student was nominated by her University, submitted a piece of coursework and then went before a judging panel in March.

Will Chambers, Senior Project Manager for ISG, was one of the judges. He said: “It’s been a privilege to be involved with the Women In Property Midlands event and to be able to share in the successes of our future built environment professionals. Over the last few years I have been involved as part of the regional judging panel and it has been great to see the strength and ability of the candidates through a variety of different construction and property disciplines.”

Each of the winners receives a £500 cash prize, a trophy and the opportunity to take part in Women in Property’s mentoring programme. The final judging will be held in London on 16th September, followed by a Best of Best Dinner at Claridge’s, to announce the winner. Madeleine and Jenny will compete with 11 other students for the national award – good luck to all those shortlisted.