A new report by ISG, exploring the regional variations in carbon emissions produced by the operation of commercial buildings, has found the UK’s built environment needs to reduce its energy consumption by approximately 80% if it is to meet its 2050 net-zero carbon emissions commitment. 13 May 2021 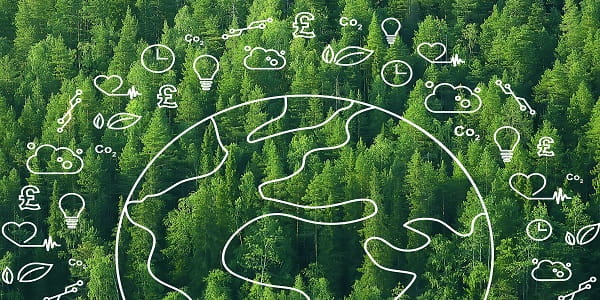 A new report by ISG, exploring the regional variations in carbon emissions produced by the operation of commercial buildings, has found the UK’s built environment needs to reduce its energy consumption by approximately 80% if it is to meet its 2050 net-zero carbon emissions commitment.

The research, carried out by the Centre for Economics and Business Research (CEBR) for ISG, used publicly available information to set out regional estimates of the emissions and energy consumption of commercial buildings to assess the scale of the net-zero challenge. However, the analysis uncovered significant challenges in the availability, timeliness and quality of data, underlining the difficulty the UK currently faces in creating a uniform and transparent process for benchmarking and performance measurement.

Using the most recent data sets available at the time the research was commissioned, the report found that all UK regions have a significant distance to travel to achieve carbon neutrality by 2050. The average energy intensity across England, Scotland and Wales was found to stand at 284 kWhe/m2, which will need to reduce to 55-70 kWhe/m2 by 2050 – equating to approximately an 80% reduction within the space of 10,455 days.

Analysis showed that the South-West is the least energy intensive region of the UK at 236 kWhe/m2, while Scotland is the largest consumer at 370 kWhe/m2. The report detailed multiple factors contributing to this disparity, including that data sources on the whole were less available for Scotland, the composition and proportion of Scotland’s businesses operated in typically high energy intensity sectors (mining and power generation), as well as average seasonal temperature variations between the UK’s regions.

Underscoring the UK’s vulnerability to differing data collection methodologies and outdated analysis of trends, the report used the latest publicly available data sources, which date from 2017. The transformation of the UK’s electricity grid from high carbon sources, including coal, to sustainable sources has been rapid. This has seen a reversal in the emissions intensity of electricity to gas – which in the 2017 data sets saw electricity penalised for its larger carbon intensity relative to gas.

The report set out an indicative regional breakdown, factoring in the impact of renewable sources within the UK’s electricity grid in 2021. This exercise suggested that with static consumption rates, crystalised from the 2017 index, regions including London and the South-East, with a higher reliance on electricity would now perform marginally better in 2021 due to the changes in electricity carbon emission factors. However, the limited observable change in overall ordering of regions, indicated that a heavy reliance on cleaner energy inputs will not alone enable the UK to meet its net-zero goals.

Without comprehensive data sets to extrapolate detailed analysis, the report could only suggest the existence of broad trends but it was clear that a significant factor in building performance related to the maintenance regime and optimisation of building services. Data suggested that poorly performing building services account for a significant percentage of energy use and emissions production. The effect of sector clustering in preferential locations that provide commercial advantage, for example access to transport hubs, a highly skilled localised workforce or abundant energy supplies also contributed to regional variances through the concentration factor.

The report’s sector analysis highlighted how some of the UK’s most prominent sectors are innovating to rise to the dual challenge of reducing their energy intensity and mitigating their emissions footprint. The education sector accounted for 2.3 million tonnes of oil-equivalent energy and hospitals accounted for 92% of total energy consumption across the entire healthcare estate. However, both sectors have already made commitments to move to net-zero carbon, defining pathways with exemplar programmes and projects under construction.

According to the data an estimated 0.6% of all industrial and commercial energy consumption was attributable to datacentres, where innovations such as free cooling from large bodies of fresh or salt water and battery or hydrogen fuel cell UPS systems are already signposting a future trajectory away from the dependence of carbon intensive solutions.

Debbie Hobbs, group director, Sustainable Business at ISG, said: “With the support of work already done by the UK Green Building Council, we set out to shine a light on the current energy and carbon performance of the UK’s commercial estate. This undertaking proved immensely challenging and points to a clear risk of not being able to transparently chart our progress towards a net-zero future. The key finding is to call out an immediate and collective response from government, industry and key stakeholders to formalise the framework for transparent and accurate data collection, along with consistent interpretation, in a timely manner.

"The scale of the challenge is starkly clear, with approximately 80% of buildings that will exist in 2050 already standing in our communities today and needing major refurbishment to achieve carbon neutrality We must also be far more ambitious with those buildings currently under construction today – many of these constructed under the latest regulations will require significant renovations in order to  meet 2050 net-zero thresholds. The built environment sector has a pivotal role to play in bringing net-zero solutions to market and these will encompass technology, material and methodology advancements, but there also needs to be a cultural shift in procurement and operational practices.

“We have less than 10, 455 days until 2050 and we need to start taking action today, stepping up, collaborating and sharing knowledge and best practice to tackle this global challenge. We have a collective responsibility to start translating these pledges into real life action and we can only do this if we are all working to the same benchmark standards with a common purpose and a drive for transformational change.”