Moss Side Leisure Centre opens its doors to grand applause

Moss Side Leisure Centre opens its doors to grand applause

ISG’s recently completed refurbishment and extension project at Moss Side Leisure Centre was unveiled to its local community, stakeholders, operator and client at its official launch last month. 13 December 2018 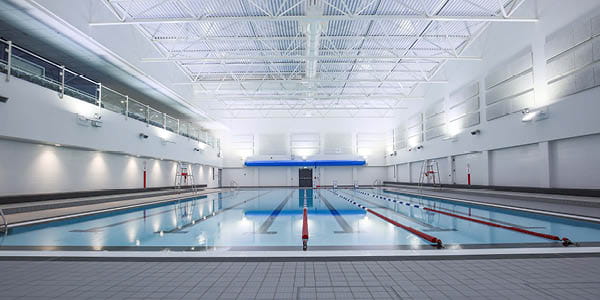 ISG’s recently completed refurbishment and extension project at Moss Side Leisure Centre was unveiled to its local community, stakeholders, operator and client at its official launch last month.

Project partners, dignitaries and members of the community took the opportunity to tour the new centre, which is operated by GLL, as part of the event.

The revamped centre is the result of a year-long, £8 million refurbishment and extension project by ISG for Manchester City Council, awarded through the North West Construction Hub (NWCH) Framework.

The vision of architects, GT3, saw the existing 1970s Moss Side Leisure Centre transformed, with an infill extension constructed under the overhang of the concrete-frame building increasing the total fitness area by 40%, and significant work completed to improve the energy efficiency of the building.

Re-roofing works, replacement of the façade with thermally efficient cladding panels, LED lighting, new mechanical and electrical systems, and the installation of a Combined Heat and Power (CHP) plant has seen the building’s energy efficiency improved by 40%.

The CHP is expected to reduce the amount of CO2 used by 13.8%, with an energy cost reduction of 23%.

Executive member for schools, culture and leisure, councillor Luthfur Rahman, said: “The positive outcome achieved is testament to the benefits of adhering to the collaborative ethos of the North West Construction Hub, which was embraced throughout this project with a genuine team approach.”

The new leisure centre has also proved a success with its users – it was announced at the event that it had achieved GLL’s second highest number of sign ups, with more than 300 new members registered in a single day.

ISG completed the project on time and to budget, delivering above and beyond on the social value targets set at the start of the scheme.