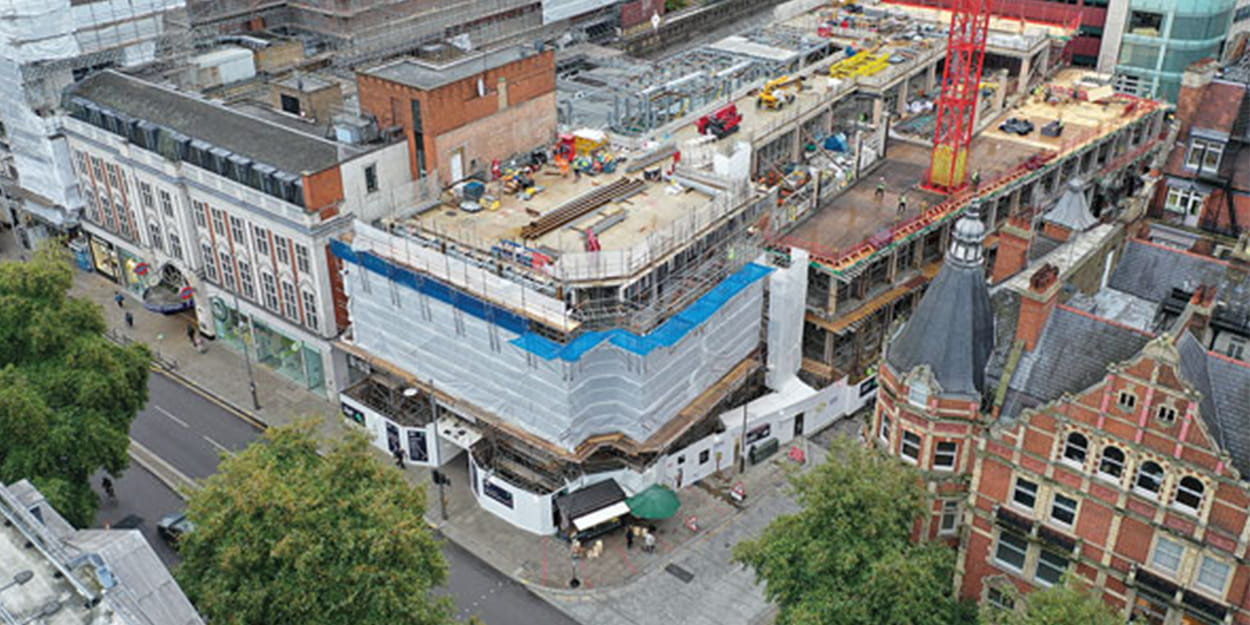 Ray Faulks, ISG’s project director, said: “The original Pontings store was demolished and replaced with two newer structures in the 1970s and 80s. We have retained approximately 30% of these buildings and infilled and extended areas with a new steel frame, while also constructing two additional floors to the footprint.”

The scheme will accommodate commercial space on all floors, but the ground level is split with retail space taking up the majority of the floorspace. An arcade splits the new building in half, with the north side of the ground floor accommodating a Boots store – which also occupies the basement – and the south side having six smaller retail units. The arcade will also provide an access point from Wrights Lane to the adjacent High Street Kensington underground station.

The main entrance to the offices features a large 9m-high cruciform steel column that creates a 12m-span lobby. Although this part of the scheme is predominantly concrete-framed, a steel column was chosen because it was easier to install and for its aesthetic qualities, as like much of the steelwork and concrete elements, it will be left exposed within the completed structure.

Explaining the rationale behind the project team’s chosen methodology, Ray adds: “The decision to retain, reconfigure and extend, rather than demolish the existing building, has significantly reduced the project programme and showcases the benefits of close collaboration between all project stakeholders to innovate and seek the best possible outcomes.”

Prior to the new ground floor being installed, a series of temporary raking steel beams had to be positioned at basement level to support the site’s retaining wall.

“Many of the temporary beams and rakers were over 15m-long and needed delivering and removing through a very small lifting point. Early engagement and design with our specialist supply chain was key to this element being so successful,” Ray explains.

As well as creating new floors, steelwork is also being used to restore the historic street line along both the Kensington High Street and Wrights Lane elevations and a new façade is being added.

The project is due to complete in late 2021.