Breaking ground at the new home for UCL Neuroscience

To commemorate the start of Dementia Awareness Week 2021, ISG’s CEO, Paul Cossell, was joined by the UCL President and Provost Dr Michael Spence and hospital partner University College London Hospitals NHS Trust on Monday 17 May to break ground at the new home of UCL Neuroscience. 18 May 2021 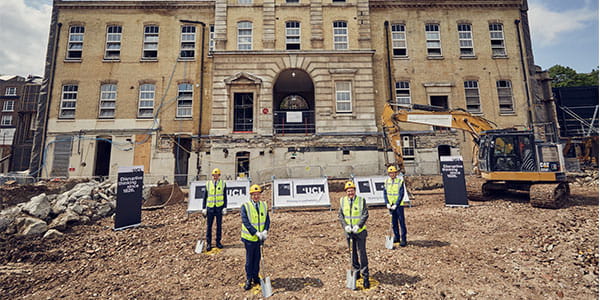 To commemorate the start of Dementia Awareness Week 2021, ISG’s CEO, Paul Cossell, was joined by the UCL President and Provost Dr Michael Spence and hospital partner University College London Hospitals NHS Foundation Trust on Monday 17 May to break ground at the new home of UCL Neuroscience.

The event celebrated the start of construction work on the landmark facility and was attended by a small number of guests – in line with the latest COVID-19 guidance – and broadcast online for international stakeholders and the local community to watch virtually.

Hosted in UCL’s former Eastman Dental Hospital facility, the event was officiated by Martin Treacy, UCL’s Project Officer leading the scheme, who welcomed Professor Alan Thompson, Dean of the Faculty of Brain Sciences and Garfield Weston Professor of Clinical Neurology and Neurorehabilitationat UCL, to the stage to commence proceedings.

Alan said: “We’re delighted to have entered the construction stage of this transformational development for UCL Neuroscience. Through this facility, we aim to translate UCL’s research into new therapies to tackle neurological conditions such as dementia. The collaboration which the building will enable between research scientists, clinical partners and patients will be fundamental in developing effective treatments for patients with disabling neurological conditions.”

Paul Cossell, CEO of ISG, next took the stage and praised the delivery team on its latest achievement. “Today’s milestone marks the culmination of an intensive two-year period of focused collaboration, with a highly motivated stakeholder team developing the design and painstakingly preparing this complex site for construction to commence.”

“Creating spaces with the capacity to deliver transformational change for individuals, communities, wider society and the environment is a consistent driver for both our business and the talented team delivering this ground-breaking project. This is a symbolic moment of immense importance as we all have a personal stake in ensuring that the facilities we build here today provide the best possible environment for patient care and for pioneering research that will transform neurological outcomes for current and future generations.” 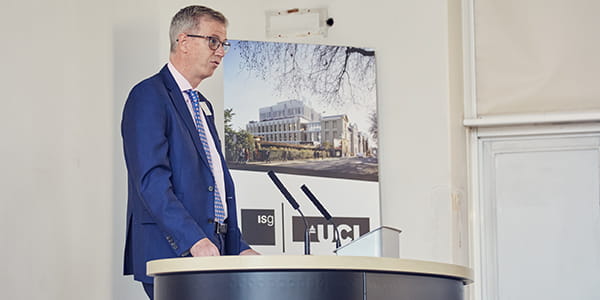 The proceedings were concluded by Kevin Argent, UCL's Director of Estates Development with some final words from the University's new President & Provost of UCL, Dr Michael Spence.

Dr Michael was on his first public appearance and official project milestone and added: “This flagship facility is a powerful tool in our quest to develop treatments for devastating neurological diseases. By equipping the next generation of researchers to develop cures, we hope to make conditions like dementia a thing of the past.” 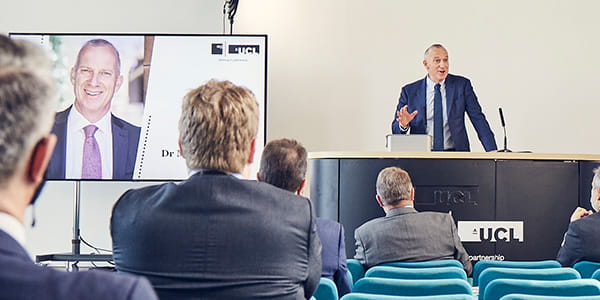 All stakeholders then ended with key representatives from UCL and ISG heading to site to mark the official breaking ground with a ceremonial dig.

Work now continues on the 17,500 square metre state-of-the-art new neuroscience facility, with demolition and construction now well underway to ensure the building is ready to be handed over in 2024. 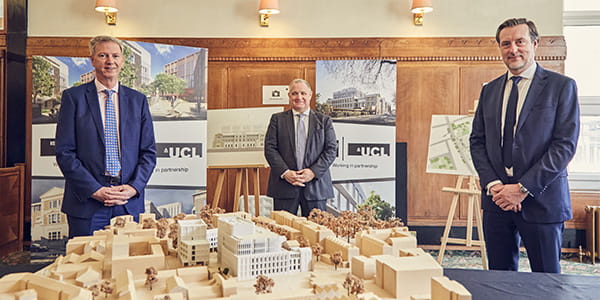 Once completed, the facility will be home to three bodies: the world-leading UCL Queen Square Institute of Neurology; the headquarters of the UK Dementia Research Institute, which is the single biggest investment the UK has ever made in dementia; and the UCLH National Hospital for Neurology and Neurosurgery (NHNN), which is the UK's largest dedicated neurological and neurosurgical hospital.