When Stuart started working at a local paper shop in Edinburgh 30 years ago, he couldn’t have imagined where a seemingly innocuous conversation would lead him.

A simple conversation with Stuart’s newsagent boss about Scottish hotels led him to apply for a hospitality course and, 30 years later, a career he loves. Now general manager at YOTEL Edinburgh, Stuart is laying the blueprint for future YOTEL hotels in the UK, the Netherlands, the UAE and all the way to Australia.

It’s not enough for Stuart – his heart lies in the industry and he wants to secure its future, which is exactly what YOTEL’s new space, delivered by ISG, is enabling him to be a part of. With community built into its core, the 276 ‘cabin’ hotel and its interactive 360° screening room have given Stuart the opportunity to share a one-of-a-kind venue with his contacts in the Scottish tourism sector, as he extends his impact beyond his day job. It’s an opportunity he’s grasped with both hands: YOTEL hosted a digital tourism conference as its inaugural event, and Stuart has more in the pipeline.

For Stuart, a chance encounter ignited a passion for hospitality – now he’s helping shape the future of the industry he loves. 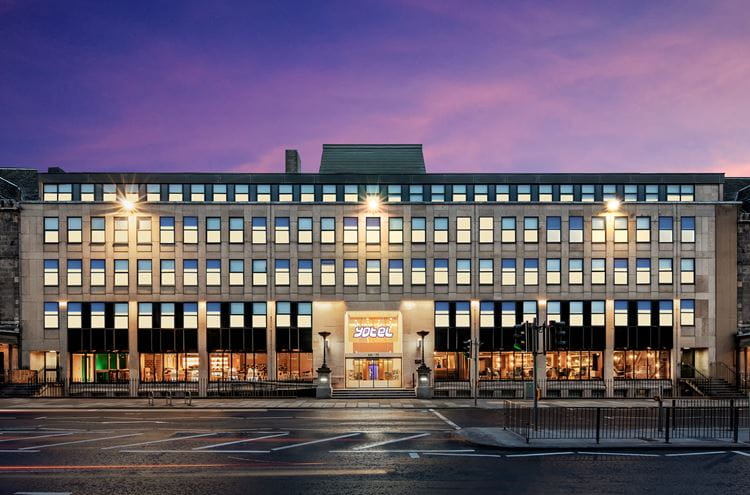 It’s amazing what a chance encounter as a young teenager can lead to.

For Stuart Douglas, his time spent working in a local paper shop alongside a man who used to run hotels in Scotland’s busiest cities has led to a 35-year love affair with the hospitality industry.

His latest mission – general manager of YOTEL Edinburgh, and to be a game-changer in the Scottish tourism sector.

A place to work, rest and play, but also home to some of the country’s key hospitality events, YOTEL Edinburgh saw ISG transform a tired 1960s office block into a 276 ‘cabin’ hotel and an inviting community space.

The first of its kind in Scotland, and indeed in any European city centre, ISG’s work centred around a complete strip-out and retention of key features that would eventually turn into a focal point for selling the space to guests and the tourism industry.

“Now, Imaginex has helped us welcome our first event just a few weeks after opening – the Digital Solutions for Tourism Conference, run by the Edinburgh Tourism Action Group on behalf of the Tourism Alliance, which was all about taking our industry into the future and making sure it is set up to embrace technology.”

ISG senior project manager, Nick Sutherland, explains: “We started off by remodelling the entire layout of the building, from the floor plate and the ceilings to the partitions and wall linings.

“This gave us the opportunity to really bring to life the ‘mission control’ style check-in desks and the futuristic feel of the community spaces. By taking things back to basics, we were able to build things from the ground up, to make sure it demonstrated the YOTEL brand perfectly. This approach also allowed us to make conscious decisions about our supply chain and our sustainability while on site, and work with local suppliers and partners.”

But it’s what took shape during the project that’s become a talking point in the local tourism industry.

“We all realised quite quickly that the atrium could become an attraction in itself – Scotland’s first 360° screening room (now called Imaginex) with a new destination bar fronting Queen Street,”  continues Nick.

“The area in the hotel that is now Imaginex started life as the breakfast area. But once it started to take shape, the possibilities revealed themselves and we adapted our plans to ensure it could be used to the best of its potential.” 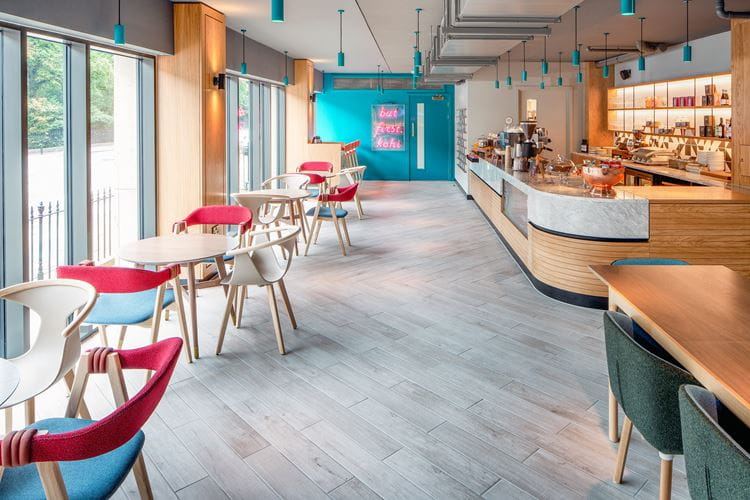 These adaptations centred around ensuring plenty of storage space was built into the areas around Imaginex, enabling a quick turnaround from breakfast to any possible event being held in the space – achievable in no less than one hour and 10 minutes, now that it’s been perfected – and also making sure it was ready for the technology that was needed to take the space on to the next level. It also meant special attention was paid to the refurbishment of the double-height glass roof cover.

Now, the space helps Stuart play a pivotal role in the local tourism industry, offering the perfect setting for key sector events: “YOTEL Edinburgh offers something that nowhere else in the country does – a tech-ready, 360° screening room that’s ready to go from 12 noon every single day,” he says. 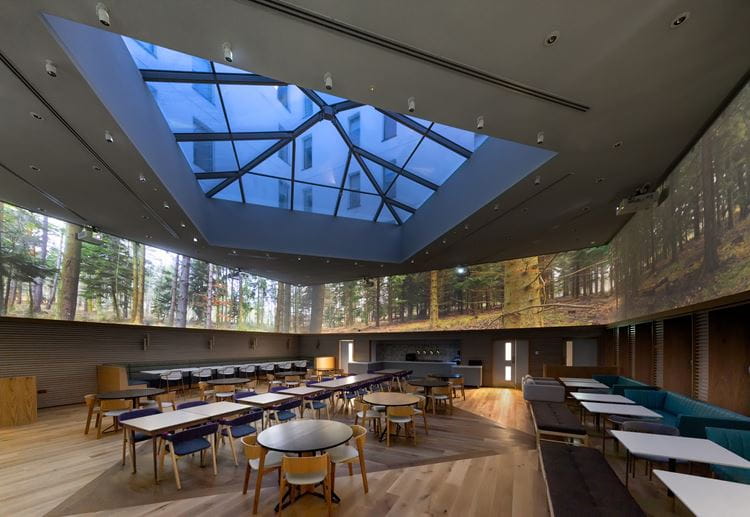 “I wanted to be able to offer something really unique, but also something useful to my colleagues in the tourism sector. So, once we were up and running, and before we opened the doors of the hotel, I invited key players from the local tourism world to come and see the space and think about how they could use it.”

He continues: “I was able to showcase how the double-height glass atrium helps us bring the outside in, despite not having the views that other spaces in the city might have, and how Imaginex can be used as an interactive space. And of course, how we’re only a mile away from the two main Edinburgh train stations, with almost 300 hotel rooms and quick and easy check-in – perfect for anyone who wants to make a night of it.

“We all realised quite quickly that the atrium could become an attraction in itself – Scotland’s first 360° screening room (now called Imaginex) with a new destination bar fronting Queen Street.”

“Now, Imaginex has helped us welcome our first event just a few weeks after opening – the Digital Solutions for Tourism Conference, run by the Edinburgh Tourism Action Group on behalf of the Tourism Alliance, which was all about taking our industry into the future and making sure it is set up to embrace technology. Imaginex was the perfect setting for such an important event, bringing grandeur and technology to life in line with the topic that was being discussed.”

The unique, tech-led offering from YOTEL paves the way for the hotel group’s other sites across the world, with Stuart’s expertise being shared with teams launching their own sites in the coming months.

Who’s to say where the Scotland tourism world will go next? One thing’s for sure… Stuart is going to be pivotal in making those conversations happen at YOTEL Edinburgh. 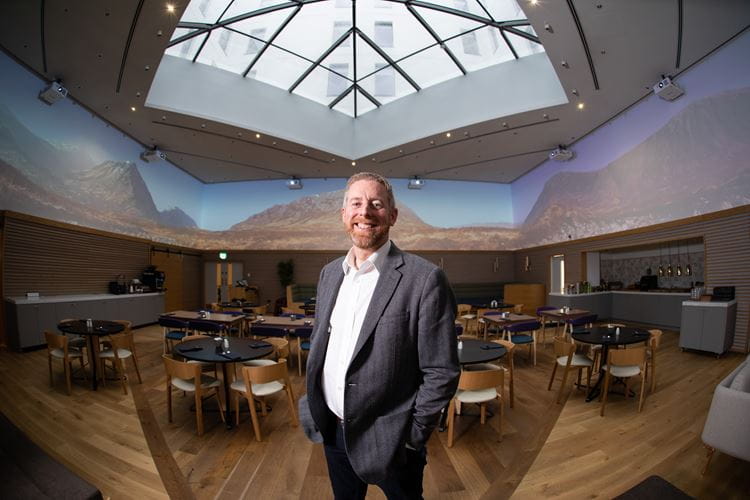