The new starter who became a global award winner in just 18 months; Ambrosio has made a real splash since joining ISG.

For many, it can take a long time to get to grips with life at a new company. It might take even longer in a foreign country.

But for Ambrosio, who grew up in Spain and now resides in the UK, his first 18 months with ISG culminated with him taking home the business’s top prize at its Global Value Awards.

Having lived all over the world, acclimatising to new cultures isn’t unfamiliar to Ambrosio. On his travels he has met people from all walks of life, learning from unique perspectives and growing as a person without even realising it.

Ambrosio’s open-minded nature drew him to ISG; its strong values and the freedom to think differently making it stand out as a brand. The values on which Ambrosio joined the company were the values on which he was eventually rewarded, as he spotted an opportunity to reinvigorate how ISG collects and reports key project information to its customers – a smart, data-driven solution that has helped ISG and its clients forge stronger relationships, while earning Ambrosio individual accolades.

Never one to take his foot off the gas, Ambrosio is already looking to the next step – whatever that may be. Not bad for 18 months…

Ambrosio grew up in Seville, the capital of Andalucía in the south of Spain – well known for the colourful Seville Fair and the orange trees that punctuate the city.

He has since explored a passion for travel, living all over the world and plying his trade in faraway places. “I’ve been very lucky to live and work in the Middle East, Vietnam, China, Turkey and Australia during different stages of my life,” explains Ambrosio. “I love seeing different cultures and understanding new points of view – the continent that impacted me the most in this way was Asia.”

Life in these countries has left an indelible mark on him and although Ambrosio didn’t notice it at the time, the experiences he had helped him grow both personally and professionally. He learned to think outside the box, a lesson he’s brought with him to his current home, London, where he works as a senior building information modelling (BIM) manager for ISG’s engineering services business.

“In our industry the problems are the same around the world, but the approach and the angle is surprisingly very different in each geography, so you need to think creatively,” he says. “In my previous role at a consulting company, I realised that what I enjoyed most was working with site teams where I could make a difference through my experience on other projects and by using technology – ISG gave me the opportunity to do this every day.”

Despite having only joined ISG in 2020, Ambrosio has already left his stamp on the business. During one of his first projects, he recognised that both the ISG team and the client would benefit from improved project progress reports – the client required more clarity, while the ISG team needed a forum to share the great strides it was making.

Coming at it with fresh eyes, Ambrosio spotted an opportunity to bring renewed dynamism to how the team collected key information on the project and reported it back to the customer, working closely with operations director, James Bevis, to create a smart, data-driven reporting platform that solved the problem for both parties.

“It’s a standardised way to collect critical information from each department and combine it in one dynamic document,” explains Ambrosio. “The reporting platform is the shell where data is analysed and distributed. The report itself makes sure everyone is up to date from each discipline, and encourages people to work collaboratively rather than in isolation.”

“Construction excites me. It’s extremely complex and we’re always trying to squeeze build time, so a big thing for us is how we make the process leaner and more efficient. It’s a constant challenge which we can only beat collectively.”

Intelligent, tech-led solutions define the BIM team Ambrosio is a part of. With technology driving everything they do, ISG’s digital construction teams simultaneously help the business win work, drive efficiencies, and provide the very best experience for customers through the development and integration of innovative solutions, from game engine technology to virtual reality.

Pushing the envelope is a key part of Ambrosio’s makeup too. He’s not content unless he’s tackling something new and exciting – it’s just one of the reasons he’s jetted all over the world and studied his way to three degrees.

“I’ve always been one to fight the norm and find better ways of doing things that perhaps have always been done a certain way,” he says. “I think it’s due to my background delivering projects in different continents. I try to push boundaries no matter what situation I’m in.”

Ambrosio’s tech-inspired reporting solution has moved the dial on cohesive reporting and made a marked difference to ISG and its clients, helping improve communication, bringing greater transparency and inspiring stronger relationships. It even led to him taking home not one, but two accolades at ISG’s 2020 Global Value Awards – which celebrate and recognise those people around the world who live and breathe its corporate values. 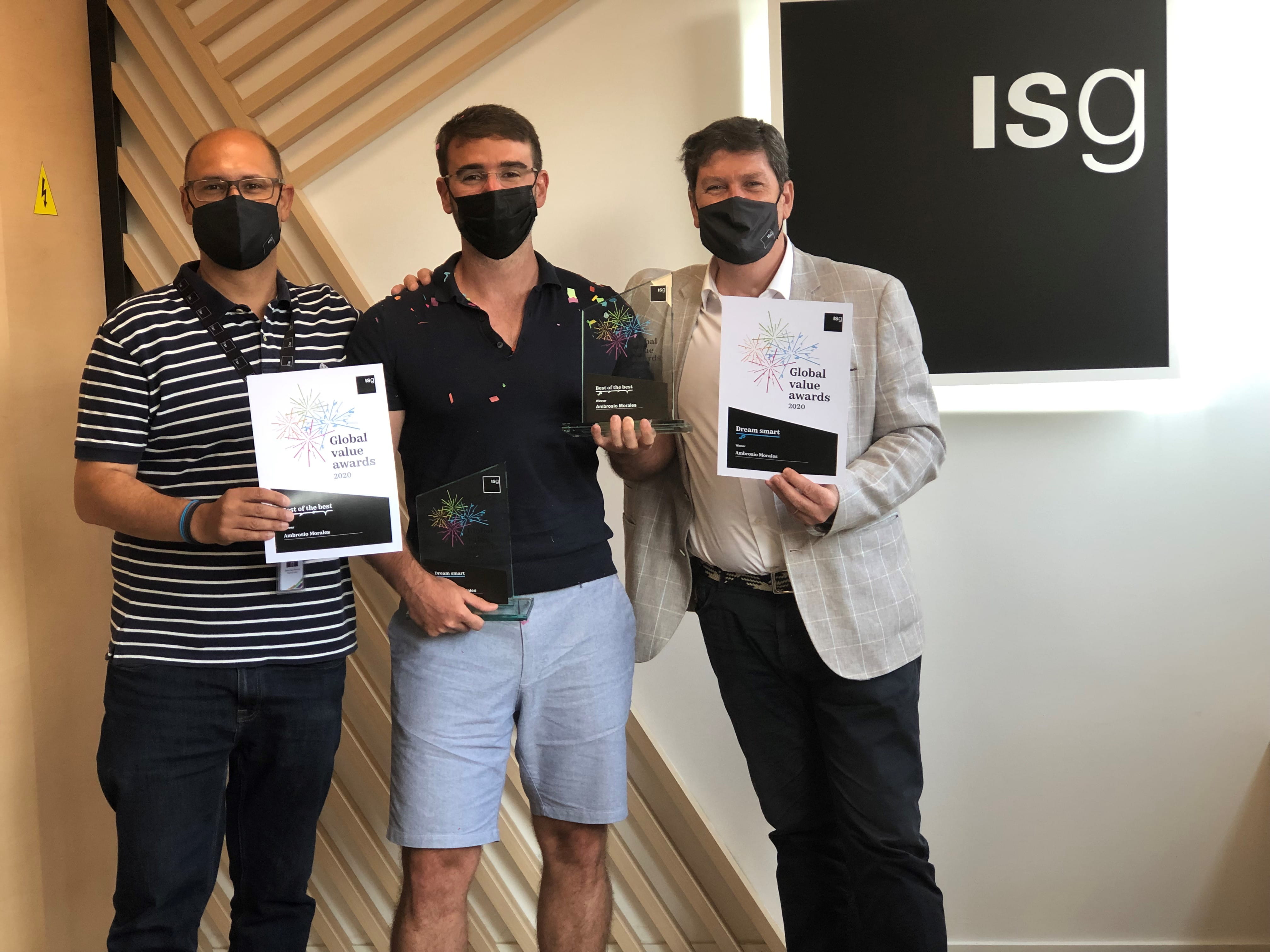 Ambrosio was not only named global ‘Dream smart’ winner, but ‘Best of the best’ too – an award which recognises the person who embodies all four values in their behaviours and work, and a quite incredible achievement just 18 months after joining the business.

“I was over the moon! The awards aren’t just for me, they validate the smart work we’ve been doing as a team,” he says modestly. “The strength of the company values is the reason I chose to join ISG in the first place – they’re unique in the industry.”

“In my previous role at a consulting company, I realised that what I enjoyed most was working with site teams where I could make a difference through my experience on other projects and by using technology – ISG gave me the opportunity to do this every day.”

Despite the award wins Ambrosio isn’t one to idle away. He’s intrigued about where the industry is going and what’s next for ISG. “Construction excites me,” he says. “It’s extremely complex and we’re always trying to squeeze build time, so a big thing for us is how we make the process leaner and more efficient. It’s a constant challenge which we can only beat collectively.”

Even with all this, Ambrosio is finding time to gain project management experience as he embraces the true spirit of ‘Build Something Special’, ISG’s employee value proposition. “The culture here is all about the next step,” he says. “I have the flexibility to tackle new challenges, and that helps you continue to learn and grow.”

“My time at ISG so far?” he finishes. “It’s been a rollercoaster.”

Find out more about ISG careers below...

Get started. Find your place.