Every type of food you can imagine, otherworldly nightlife and an avant-garde art scene – Berlin’s cultural flair ticks all the boxes for Sharif. 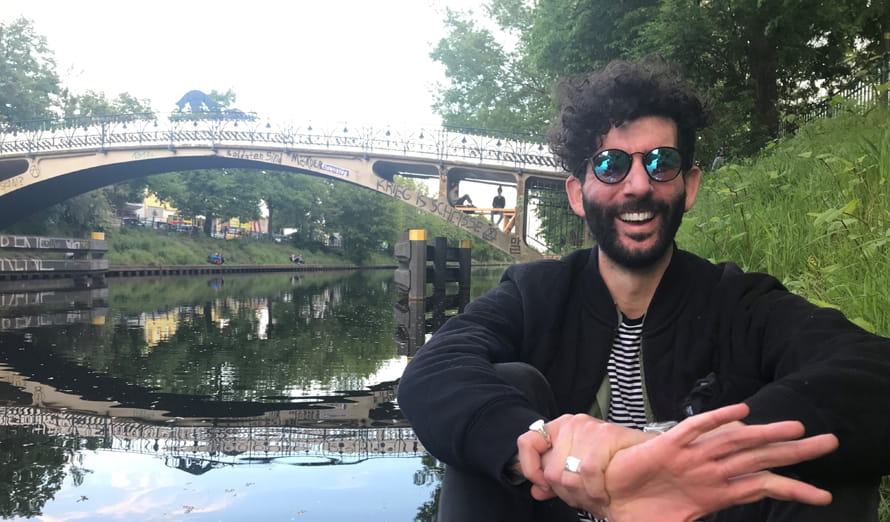 Every type of food you can imagine, otherworldly nightlife and an avant-garde art scene – Berlin’s cultural flair ticks all the boxes for Sharif.

Originally from the UK’s most easterly point, Lowestoft, Sharif moved to south-east Berlin after his wife started a new role in the German capital.

They wanted something different, and Berlin is certainly that. Sharif has immersed himself in Berlin’s culture since he upped sticks, sampling the delicacies of his cosmopolitan hometown, Neukölln, and frequenting the terraces of local football team, FC Union Berlin.

He has also committed to learning the language, key not only to cultural immersion but to working in the German construction industry – which Sharif is, having joined ISG as a project manager in 2019. ISG supported Sharif in his studies, enabling him to attend language school in the mornings and work part-time in the afternoons – meaning he can craft his German and put it into practice on ISG’s prestigious projects across the city.

Sharif has settled into his new home and the language lessons are paying off – he’s even starting night school in an attempt to master the German tongue. “Ich fühle mich zu Hause. Nicht nur in Berlin, sondern auch bei ISG,” he says. “I feel at home. Not only in Berlin, but also at ISG.”

Enjoying all a new country has to offer is one thing, starting a new job while learning the language is entirely another.

That’s what faced Sharif after he finished his master’s degree in construction law and dispute resolution at King’s College London, UK, and moved to Berlin with his wife to explore a fresh opportunity.

Berlin was a city he was familiar with, having visited multiple times with his wife in the not-too-distant past. “We decided to embark on another adventure,” he explains. “We always loved our time in Berlin having visited numerous times, so when the chance presented itself to live here, we jumped at it!”

On arrival, and with full-time work in his sights, Sharif set his stall out to learn German, taking intensive language lessons from the off. With his construction background, he recognised the importance not only of embedding into the culture, but being able to communicate and share information effectively in the German construction sector.

“I enrolled on a full-time language course,” he says. “It’s been the most humbling experience of my life. I still have a way to go, but to be writing a piece for ISG Deutschland 16 months after moving here and having learned so much already, it only gives me the enthusiasm to learn more.”

“As I reflect on my time with ISG, I’m grateful not only for the team taking a chance on me and giving me the opportunity to work on such exciting projects, but also trusting me to deliver.”

With a civil engineering degree and 17 years’ experience in construction, it wasn’t long before Sharif found work in his area of expertise, joining ISG as a project manager four months after the move from the UK. ISG worked with Sharif to give him the time to attend language school on weekday mornings, and embark on his career with the business in the afternoons. With that, he was thrust straight into one of ISG’s most high-profile projects in the region.

“I joined the project towards the end of the delivery phase, and was immediately impressed with how much work could be delivered simultaneously by so many suppliers in the same space,” says Sharif. “It took a tremendous amount of co-ordination.”

The project journey wasn’t always smooth, but being part of the team that successfully navigated its challenges is something Sharif is particularly proud of.

“Towards the end, we received numerous additional requests from the client,” he explains. “I became responsible for the day two phase and final handover of the project. It was a real test, particularly joining the team so late in the day, but I loved it! The team taught me so much and I’m incredibly proud to have had a small part in giving the building a new life.”

The challenges make the journey worthwhile, and Sharif’s ready for more. Since joining the business nearly 18 months ago, every step has been a steep learning curve – but it’s an experience he looks back on with great fondness.

“As I reflect on my time with ISG, I’m grateful not only for the team taking a chance on me and giving me the opportunity to work on such exciting projects, but also trusting me to deliver,” he says.

“We have a truly great team here – whenever I have needed support the team has been there for me, and I’m looking forward to collaborating on many more projects with them.”

“It’s been the most humbling experience of my life. To be writing a piece for ISG Deutschland 16 months after moving here and having learned so much already, it only gives me the enthusiasm to learn more.”

His German adventure has certainly left the door open for the potential to consider alternative destinations in the future, Sharif concludes: “I wouldn’t be opposed to moving to another city or country. That’s the great thing about ISG, there are opportunities in different parts of the world, which is awesome.

“As for now, I’m excited to continue my journey in Germany. I’d like to share my experiences from the UK and in other sectors with the team here, and continue to work on the most important projects in Berlin.

“Ultimately, I’d like to help build a team that is seen as the industry leaders in fit out, not just in Europe but around the world.”